Previous publications in the cycle -
​Table of the Contents for the publications cycle Biological Age and Biomarkers of Aging
“Our purpose is to take the science of epigenetics and make it useful for everyone.
If the science of epigenetics can detect diseases early,
​why wouldn’t we share it?”
- ​Prof. Moshe Szyf.
​ ​
Our guest authors are Moshe Szyf and David Cheishvili.

Prof. Szyf is a biochemist, geneticist, epigeneticist, a pioneer in the rapidly growing field of epigenetics, and an author and co-author of over 290 scientific publications.
Three decades ago he proposed that DNA methylation is a prime therapeutic target in cancer and other diseases and later also postulated and provided the first set of evidence that the "social environment" early in life can alter DNA methylation, thus bringing to life the new field of 'social epigenetics'. He is the founder of the HKG epiTherapeutics, an R&D company that deploys the science of epigenetics for early disease diagnosis and prevention and for human biological age testing. Professor Szyf teaches at McGill University in Montreal. He is the founding co-director of the Sackler Institute for Epigenetics and Physiobiology at McGill.
​
Dr. Cheishvili is a PhD in genetics and molecular biology with postdoctoral research experience in epigenetics and over 20 scientific research publications with a focus on epigenetic mechanisms of cancer. He is currently working in Canada, is an affiliated member of the Department of Oncology, McGill University, and also an adjunct professor of the Department of Molecular Biology, Ariel University, Israel. Dr. Cheishvili is also a co-founder of the Canadian branch of epiTherapeutics.

​The story of the epigenetic age would be incomplete without a foreword on genetics.

​Genes are responsible for much more than our physical appearance or predisposition to some disease.
​Have you noticed that some people are more prone to mosquito bites? A DNA sequence can determine your attractiveness to mosquitoes. Genetics will determine your addiction to coffee, susceptibility to spicy foods, whether you are right-handed or left-handed and a ratio of ring and index fingers sizes. All that is predetermined from the moment of our birth.

Changes (mutations) in DNA sequence do not only tell us about a predisposition to certain diseases, they can cause diseases and sometimes even be lethal. Popular Hollywood actress Angelina Jolie removed her mammary glands, replacing them with implants. Subsequently, she removed both ovaries and the fallopian tubes. The reason for that dramatic action was that she discovered that she was a carrier of a mutation in the BRCA1 gene, which increased the likelihood of breast cancer by 87% and ovarian cancer by 50%. A gene, normal or defective, determines what happens to us now or what may happen in the future.

For a long time we used to think that genes alone were responsible for the outcomes.

The role of epigenome in our destiny

However, DNA and genes are not the only instruction-type mechanism that determines our physiology. There is something “Epi”, something beyond our genes, which defines whether and how the information written in our genes is used. (from the ancient Greek, “epi” is a prefix meaning "upon", "on', "over". Epigenetics means - above, on top of the genetics.).
​
We have the same genes in every part of our body and in every cell of our body. However, each part of our body has to execute different functions. A brain cell is very different from a liver cell and from a skin cell. How is it possible that the same sets of DNA in every cell act so differently?
​
Epigenetic mechanisms and epigenome in our bodies evolved to address this problem.
​
We have the same genes in every cell but not the same Epi. And it is the "epi" part, chemical compounds on top of our genome, that tells the genes when and how to act, in other words, determines how genes are expressed. That combination of genetic marks across the genome is called the epigenome. In the last 15 years we have learned that Epi can also change in response to exposures and experiences. “Epi” not only allows building very different cells and tissues off the same DNA, but also transforms us from machines with a predetermined genetic fate into an organism capable of dynamic adaptations to changing environments by turning specific genes on or off at a certain time.
​
​The environment, nutrition, lifestyle, emotional stress, physical activity make changes in our genome function without changing the nucleotide sequence, but rather by adding or removing epigenetic “punctuation marks” that can completely change the meaning of the “sentence”.
​ 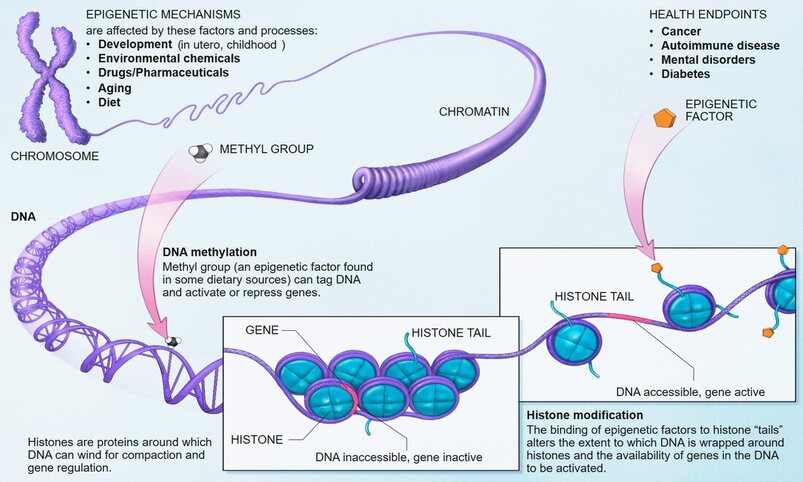 Image credit: National Institutes of Health - http://commonfund.nih.gov/epigenomics/figure.aspx
​What are those “punctuation marks” that change the whole meaning and interpret the information recorded in our genome in different ways? The epigenetic function in our bodies is enabled through three major mechanisms:​The other two mechanisms are -  ​
Those epigenetic marks, like punctuation, sometimes emphasize a sentence like an exclamation mark, sometimes they change the meaning of the whole sentence, like a comma in the sentences: “Execute him, we should not pardon him!” and “Execute him we should not, pardon him!”.

The science of epigenetics

​The science of Epigenetics studies punctuation marks; it studies changes in an organism caused by alterations in gene expression, rather than changes in the genes themselves, and biological mechanisms behind those alterations.
​
​Having arisen more than 80 years ago, epigenetics recently gained the wide acceptance in the scientific community. Unlike even 20 years ago, we now have technical capabilities to map those methylation marks on DNA, at a single nucleotide resolution, for the entire genome. In just 20 years, since 1997, the number of publications on epigenetics has grown from several per year to over 4,000 a year.

Thus, if changes affect our genome, then there should be a measure of the influence of those factors.

About the importance and practical applications of epigenetics

Even though we cannot perform the same testing of epigenetic factors in humans as we do in animal models, we can use natural disasters that offer an opportunity to examine the consequences of randomized adversity in humans and analyze the impact of stress on our epigenome and our health. We have established that there are broad alterations of the DNA methylation patters in response to social and environmental factors, such as stress during a mother's pregnancy or during early childhood.
Those changes in the DNA Methylation patterns correlate with health outcomes such as increase in autism, metabolic disease, autoimmune disease.

​While negative life experiences result in profound and traceable epigenetic effects, the message of the epigenetics is overall positive. Consider that -

DNA Methylation patterns do not only differ as a result of early life experiences and lifestyle choices, but have also been shown to strongly correlate with age, thus emerging as a new and one of the most accurate biomarkers of aging.
Biological age, which is estimated based on DNA Methylation profiles in our epigenome, is frequently referred to as "epigenetic age".
​
A strong correlation with the chronological age is one of the requirements for a biomarker to be recognized as a reliable biomarker of aging. While the epigenetic age strongly correlates with the chronological age, the two sometimes differ. And the biological age, or epigenetic age, is a much better predictor of someone's longevity and health than the chronological age is.
​
Testing someone's epigenetic age became possible due to the rapidly developing science of epigenetics and our knowledge of the DNA methylation changes and also due to the growth in computational abilities and AI.
​​
​The first evidence of the effect of age on the methylation levels goes back to the 1960s, when a group of Soviet scientists from Moscow showed that during spawning migration of pink salmon, the methylation level decreased by 35%, without changes in the DNA (Berdyshev, Korotaev et al. 1967).

Age-related DNA methylation changes, at least not all of them, do not necessarily cause aging, but they correlate with the aging.  The first demonstration that the level of DNA methylation in blood can accurately determine a person’s age was shown in the works of Steve Horvath  (Bocklandt, Lin et al. 2011). A number of studies have demonstrated that DNA methylation age predicts all-cause mortality (Chen, 2016; Marioni, 2015; Christiansen, 2015).

Epigenetic clocks are biochemical tests based on the DNA methylation patterns that can estimate our real biological age (or epigenetic age), which varies depending on our health and affects the duration of our lives.
​Some of the epigenetic clocks -
The Persistence of Memory created by Salvador Dali in 1931 is an attempt to explain the complex and non-linear nature of time. Epigenetic clock too is non-linear and changes over time non-linearly. 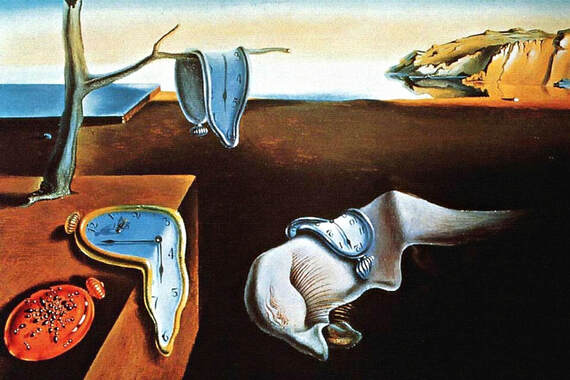 Scientists at HKG epiTherapeutics led by prof. Szyf have studied a large number of age-related CG methylation sites in hundreds of published DNA methylation data sets and studies, and have chosen a region containing 13 methylation sites that could be analyzed in saliva samples to accurately predict biological age. In addition, we have validated the accuracy of our epigenetic clock against the data and results from other currently existing epigenetic clocks, and have established that the EpiAging, as we call it, is at least as accurate as other epigenetic clocks.
Based on that scientific data, we have developed and implemented a convenient and effective EpiAging detection test.
​
Anyone in the world can order the test on www.epi-age.com and download the smartphone application, EpiAging, to retrieve their epigenetic age test report.
​Through the EpiAging App a person can also learn about the science behind epigenetics and study health related topics. Based on their specific test results and lifestyle, a person can identify how to positively impact their overall health and well-being. They can also track how their epigenetic age changes.
A note from Antiaging4Everyone -
​epiTherapeutics kindly offered to give a 10% discount on the epigenetic age testing to our readers. The discount code is easy to remember - antiaging4everyone.
About HKG epiTherapeutics
​
HKG epiTherapeutics Limited was established in 2016 by Prof. Moshe Szyf. It is a Research and Development company that develops novel proprietary tests based on the DNA methylation and next generation sequencing technology for early detection of diseases such as cancer (including liver cancer, lung cancer, prostate cancer, breast cancer and colorectal cancer, etc.). The R&D facilities of the company are located in Hong Kong. HKG epiTherapeutics is HIPAA (USA) compliant.

The company’s primary focus is an early detection and prevention of diseases such as cancer and chronic diseases in order to positively impact the healthcare, well-being, and quality of life of people worldwide.

Just recently the company decided to apply its extensive scientific expertise in epigenetics and utilize its R&D facilities to also offer epigenetic age tests for adults who have an interest in their well-being and longevity.
References and Literature

Previous publications in the cycle -