How Old Are You Really?  Biomarkers of Aging

Individual testing
Research and development of anti-aging therapies                  Telomere Length
Epigenome and Epigenetic Clock based on DNA Methylation  ​​
Table of Contents for the publications cycle
Previous Publication - Biological and Chronological Age
Next Publication -
Epigenetic Clock and DNA Methylation Based Biomarkers of Aging
Order your test of Epigenetic Age with the discount code "antiaging4everyone"
Use discount code antiaging4everyone to get 10% off on the biological age test by one of the pioneers of the field of epigenetics, professor Szyf, founder of HKG Epitherapeutics, to be used on www.epi-age.com

What is a biomarker of aging? 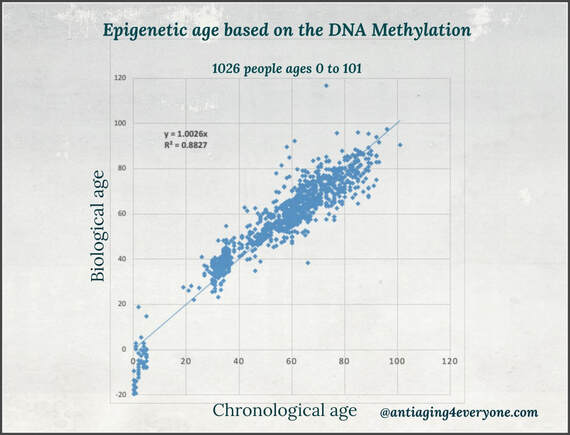 Biological Age Estimation based on the DNA Methylation pattern. Biological vs. Chronological age. Real data from over 1,000 people is used in this model.
There are over 600 of human biomarkers of aging. What criteria are used to establish a biomarker as useful in estimating biological age in humans?
​
+ It must be possible to test it more than once and without harming a person. Click to expand or collapse

For example, a biomarker that can only be measured in the brain or inner organ cells is not a suitable biomarker. Essentially, it means that a biomarker should be detectable in representative levels in urine, blood plasma, saliva, hair or stratum corneum (the very top, outer layer of our skin). ​

A biomarker should also be relative easy technically to test in a laboratory.

+ It should be useful in predicting aging.

Age at menopause has been shown to correlate with longevity. One longitudinal study from Brazil (Roman, 2018) showed that women who experienced menopause between ages 50 and 54 lived longer than women who had an early menopause between the ages 41 and 44. Apart from the obvious gender limitation, it's a one time event that cannot be tested to evaluate effectiveness of an intervention.

Many physical and cognitive biomarkers that can predict disease and mortality outcomes have been proposed. Many of them are summarized in the tables S1, S2, and S3 of this study (Lara, 2015). Among those biomarkers are memory, verbal fluency, muscle strength etc. Such biomarkers are indeed indicative of upcoming frailty, physical and mental decline, and death. However, some of them are lagging indicators that are mostly visible after a person started exhibiting signs of aging.

As defined by the American Federation for Aging Research, a biomarker of aging should "predict a person’s physiological, cognitive, and physical function in an age-related way. In other words, it must predict the future onset of age-related conditions and diseases, and do so independently of chronological age.

+ The biomarker should trace the underlying aging process, not effects of a disease.

This may sound confusing because age and disease go hand in hand, in our minds and frequently in life.

Yet, they are two different, however closely related dimensions.

There are many drugs that can change the surface expression of disease, work on symptoms. And there are biomarkers specific to disease. A reliable and useful biomarker of aging should reflect the state and predict the progression of an aging process, for example, accumulation of senescent cells, mitochondrial dysfunction, epigenetic state.

Why do we need biomarkers? Practical application

The practical application that we, as individuals in search of health and longevity, are mostly interested in is individual testing to estimate our biological age or track its changes. ​
Research & Development. Evaluation of effectiveness of anti-aging and rejuvenation therapies
+ Read more.

An effective anti-aging therapy would slow or reverse an underlying aging process, not just have a positive impact on one part of the body or its function (e.g. cholesterol levels). A positive impact on some organ or process is not only not necessarily an indication of the slowing of an aging process, but as we know from pharmaceutical drugs impact, it may happen along with the overall health deterioration from numerous side effects.

Therefore, majority of the health biomarkers that can be tested cannot be used for evaluation of anti-aging interventions. The best available method we currently have to assess the impact of any factor, including a therapy, on human longevity is long running longitudinal studies, which are based on enrolling individuals and following them for years, until their death. As you can imagine, that is not very practical.

Biomarkers of aging would allow testing and validating effectiveness of life extending therapies without having to wait till the end of human life.

Types of biomarkers of aging

As of now, over 600 human biomarkers of aging have been discovered, and a number of recent studies attempt to systematize them. All biomarkers can be divided into phenotypic (physical, external and cognitive) and molecular (Xia, 2017; Sebastiani, 2017; Wagner, 2016). See examples below.

Using panels of molecular biomarkers involves -  That may be feasible in clinical and laboratory settings, but not at home.
The most accurate at-home tests of the biological age that are based on one biomarker only are -
A sample of blood or saliva is collected at home into a kit supplied by a testing company. The person mails back the sample. Results are analyzed in a laboratory.

The history of our knowledge of telomeres begins with the American anatomist Leonardo Hayflick who in 1960-s discovered that cells cannot replicate indefinitely and proposed that that must be a mechanism behind our aging. He was followed by the Russian biologist Alexei Olovnikov, who discovered shortening chromosome ends and proposed the telomere shortening theory of aging.

​Telomeres are protective caps at the end of chromosomes; they shorten with each cell division. When telomeres becomes critically short, a cell enters the state of replicative senescence. If a cell stays in that state of senescence, it damages its surroundings. Alternatively, a cell commits a suicide, called 'cellular apoptosis', for the 'greater good' of the tissues and body.
Shorter telomeres correlate with an increased risk of morbidity and mortality.

Telomere tests estimate a person's biological age by determining the length of a person's telomeres in relation to that person's age.

​Our genes are 'set in stone' but not their expression and influence on our health.
Epigenome is a set of chemical compounds attached to our DNA or to histones, around which DNA is wrapped, that tell our genome what to do and is ultimately responsible for how our genes are expressed (Epigenomics Fact Sheet, 2016).Epigenome performs its functions via two molecular mechanisms: histone modification and DNA methylation.
Epigenome - roles and mechanisms
​Epigenome roles -

1. Accommodate the variety of cells and tissues built off the same genes in an organism.
The first and obvious function of the epigenome stems from the variety of cells and tissues in our bodies, all of which have exactly the same genome. The differences between a red blood cell, a neuron (brain cell), a muscle cell, a skin cell etc result from when and how different genes in their nucleus are turned on or off. The epigenome establishes many of these differences. ​

2. Environmental adaptations within the lifespan of one organism.
​The second role that epigenome plays is the environmental response, an adaptation to the conditions of an organism's immediate environment. Evolution takes thousands of year to produce a stable and inheritable genetic change in response to the environment. An epigenetic change allows responding within a single lifespan.
Latest scientific research shows that epigenome is partially heritable, and can be changed in response to environment, lifestyle, disease, nutrition, early childhood experiences. ​​​

1. Histone modifications, that control gene expression indirectly. Histone proteins are structures, around which long DNA molecules are wrapped creating the chromosome shape. Various chemical tags indicating if that DNA region should be ignored or used can be attached to the histones. Other proteins can sense those histone modification tags. ​
​
2. DNA Methylation, impacts DNA in the genome directly.
Methyl groups can attach to DNA in various places of a genome (the term is "DNA methylation') creating 'tags' or 'on-off switches' for the genes. ​Those methylation tags create patters that change throughout life. The methylation patterns and their dynamics have been found to change with the age.

3. RNA-mediated gene silencing (Holoch, 2015).
Back in 1960-s, Russian scientists have discovered that global genomic DNA Methylation decreases with age (Berdyshev, 1967).
Fast forward to the present time, DNA Methylation Patterns and Epigenetic Clocks are among the best studied and most reliable biomarkers of aging.
​Throughout our lives, DNA methylation changes in the following way - By looking at the pattern of the DNA methylation, we can tell how old a person is biologically. Utilization of this biomarker of aging became possible only recently as it requires application of not only mathematical models, but also advanced laboratory analysis and computer technologies.

As of 2019, the epigenetic markers of DNA methylation are the most precise biomarkers of aging when used alone.
The test for estimating biological age based on the DNA methylation became known as 'epigenetic clock'. The method and the term were pioneered by Steve Horvath (2013), and his clock is known as 'Horvath clock'.

Limitations and interpretations of the biological age test results